Can Marijuana help with Smoking Cessation?

Can Marijuana help with Smoking Cessation?

Marijuana and its derivatives are known to treat a number of medical conditions ranging from Alzheimer’s to PTSD. Researchers now believe that CBD, a compound found in Marijuana, can also help smokers who want to break their smoking habit.

In this blog post, we will be discussing in detail the role of marijuana, particularly CBD, in dealing with nicotine addiction.

CBD (cannabidiol) is a compound found in marijuana which is known for its therapeutic effects.  Contrary to THC (tetrahydrocannabinol), which is known for producing an euphoric “high”, it has non-psychoactive qualities, which makes it pretty safe to use.

This is the reason why CBD is extensively used to treat a number of health conditions, including diabetes, arthritis, chronic pain, depression, anxiety, PTSD, schizophrenia and epilepsy. It is also used by cancer patients for dealing with the side-effects of chemotherapy, like nausea and pain.

Can CBD Break My Smoking Habit?

A study was conducted back in 2013 to test how the use of CBD can help smokers control their cravings. The study included 24 smokers, chosen at random, who were divided into two groups.  All the participants were given inhalers, along with certain instruction on how to use it. They were told to use the inhaler whenever they felt the urge to smoke a cigarette for at least one week. They weren’t actually told to not smoke, but were just instructed to use the inhaler when they have a craving.

One group had CBD in their inhaler, while the other had nothing (i.e. the placebo group). The results showed that members of the placebo group experienced no difference in their smoking habit, while the ones who used CBD smoked 40% less cigarettes during the entire week. These results are very encouraging for smokers, as it shows that CBD can reduce nicotine cravings without causing any withdrawal symptoms.

A subsequent study by the same researchers was published in 2018. The researchers wanted to focus on how the use of non-addictive cannabinoids can treat nicotine withdrawal from nicotine.

The study included 30 smokers, who had quit smoking overnight and weren’t seeking any medication. They were again divided into two groups and one group was given a dose of 800 mg CBD, while the other one was given no active compound (i.e. the placebo group).

The researchers reported that the ones who were given CBD had a much weaker response to images of smoking than their placebo counterparts.

This proves that people who have consumed CBD have fewer thoughts about smoking and have a better chance of smoking cessation altogether.  However, it is important to note that the research also concluded that a single dose of CBD is not enough to effectively deal with the nicotine withdrawal symptoms.

CBD has a Relaxing and Calming Effect 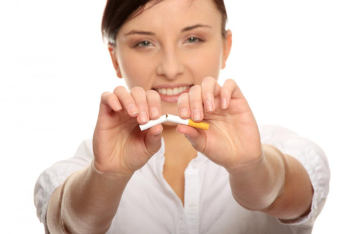 Smokers should know that CBD does not replace the nicotine in the body. It merely helps individuals in dealing with the symptoms of the nicotine withdrawal. Some of these symptoms include:

According to a study, CBD affects 5-HT1A receptors in the body, which are responsible for controlling and regulating the serotonin levels in the brain and body. They also affect the endocannabinoids receptors, which modulate the stress and energy levels in the body.

This makes CBD perfect for coping with the symptoms of nicotine withdrawal and increasing the chances of smoking cessation.

There are still many naysayers to the idea of using one drug to reduce the dependency on another drug. However, this concern isn’t exactly well founded.

As the prohibition of marijuana consumption continues to shrink, new trends are continuously emerging in its wake. One such a trend is a marijuana-friendly rehab center by the name of High Sobriety that operates in California. This addiction treatment center does not consider marijuana as a “gateway drug”, but rather a means for recovery.

This trend could soon be picked up by many other rehab centers to help individuals in effectively overcoming their addiction. The whole idea behind this approach is replacing one drug with another, in order to facilitate recovery. Some may argue that this may create “cross-addiction”, but there is evidence to support that replacing one drug with another is an effective way to cure addiction.

There are many alcohol detox facilities where they put patients on highly-addictive psychoactive drugs, called benzodiazepines, to decrease their alcohol dependency. Similarly, there are many rehabs that treat OxyContin and heroin addiction by replacing it with an opoid, like suboxone. In fact, most of the rehab centers in the world put patients on different drugs and call it medication, just to ’ease them back to health’. And that’s not all. Natural plant medication is also being used in order to promote recovery.

An article published in the American Journal of Drug and Alcohol Abuse, reported that the use of psilocybin can be used to cure alcohol and nicotine dependence. Psilocybin has also been found effective in alleviating depression and anxiety. Similarly, ibogaine is another natural plant that is gaining popularity in treating opioid addiction.

More and more plant medications are gaining empirical support as effective and safe methods of treatment. Therefore, the use of marijuana for treating addictions is not a matter of if, but when.

How to use CBD

Because of their widespread use, CBD products are readily in the market in various forms. 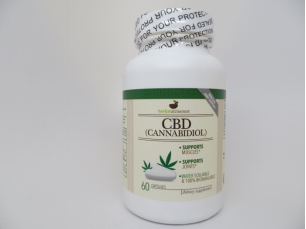 The most common way people consume CBD is through capsules. CBD is processed and put in soft coatings that make it easy to swallow.

CBD capsules are popular because they are extremely convenient to use. They create no hassle, no mess and most importantly, they don’t require any prep work for consumption. Since they come in the form of capsules, the serving size of each pill is mentioned on the packaging.  This allows the user to monitor the amount of CBD they are consuming each day.

CBD oil is also a popular way of consuming marijuana for its therapeutic effects. CBD oil is made with extracts from the cannabis plant, and is extensively used for treating various illnesses.

There are two ways in which CBD is oil is consumed, orally and through vaping. The proper way to consume CBD oil orally is to put a few drops of the oil under the tongue. However, vaping is a much more effective option, as it has a faster absorption rate as compared to oral ingestion.

CBD isolate, also known as CBD crystals, is the purest form (98% to 99%) of CBD available. The crystals can be consumed by adding them to food as they are virtually tasteless. They can also be dabbed for more effective absorption.

However, CBD isolate is not easily available as its supply is somewhat limited.

CBD is also available in the form of salves, such as muscle rubs, lotions, creams and soaps. However, they are mainly designed for dealing with pain and soothing irritated skin. This is why they may not a viable option for smokers who want to consume CBD for easing their nicotine withdrawal.

Are there Any Side-effects?

Although CBD is generally considered safe, some people may experience side-effects from its consumption. Some side-effects of CBD include:

Therefore, it is always better to get consult a doctor before consuming CBD in any form.  This is particularly important for people who are consuming CBD on a long-term basis.

Individuals who are looking to quit their smoking habits shouldn’t rely on CBD consumption alone in order to deal with cravings and withdrawal. There are various activities that must be used in conjunction with the CBD, to increase the chances of smoking cessation.

Some of these activities include:

As mentioned earlier, one dose of CBD is not enough to deal with nicotine cravings. This is why smokers should consider getting a medical marijuana card that will help them obtain and consume CBD products easily for a long-term treatment regimen.

These cards also help save money, as individuals carrying marijuana cards are not liable to pay sales tax.

We are an online telehealth platform that assists military veterans, wheelchair professionals and first responders in obtaining a medical marijuana card New York. We make sure that we follow all the regulations and laws of different states. In addition to that, we ensure that all of our practices are in compliance with HIPAA.

You can also visit our website for an online evaluation with one of our doctors. They can also provide answers to any query you might have like does cannabis cure cancer. You do not have to worry about the quality of marijuana. Contact us now.