Medical Marijuana and Sports: Can the It Help Athletes? 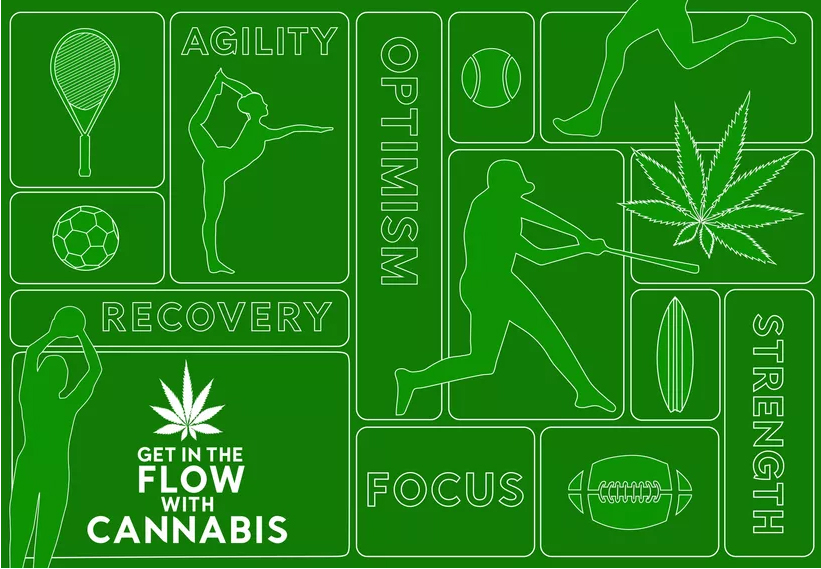 The tide is slowly but surely turning for marijuana consumption in the country, at least for medicinal purposes.

As more states continue to adopt medical marijuana legislation, we look towards the application and effectiveness of the drug in sports and athletics.

Opinions on Cannabis Consumption in Sports

In recent history the use of cannabis for physical enhancement began during the Second World War. Research suggests that American, British, German and Japanese militaries dispensed amphetamines to their soldiers to counter fatigue, raise spirits and improve endurance.

Athletes adopted the soldiers and began taking drugs like amphetamine, steroids and marijuana during the 1950s. Their objective was to enhance performance, build up mass and increase metabolism.

The sporting world has a mixed reaction to cannabis, compared with other banned enhancement drugs. Some supporters argue that cannabis should not be included in the list of banned substances because cannabis does not actually enhance performance or destroy the spirit of the sports in any way. Medical marijuana can actually be beneficial for athletes to reduce pain, help them relax before and after a sporting event and improve metabolism.

Proponents of banning the drug argue that cannabis can enhance performance for athletes in certain conditions. The drug is also believed to be detrimental when consumed in large quantities. Lastly, athletes are upheld as role models. Critics argue that consumption of marijuana can lead to setting bad examples for kids who look up to these athletes.

The Advantages of Medical Marijuana for Athletes

It isn’t entirely uncommon for athletes to use natural herbs and supplements to enhance performance during sports. Not every energy boosting drink is banned. Athletes often consume legal supplements and energy boosters that help their bodies recover from fatigue and pain to perform better on the outfield.

The question about whether marijuana can actually make a difference to an athlete’s performance is not easy to answer. This is because the studies on the effects of marijuana on sporting activities are very limited. The few studies that are available tend to focus on the negative side effects of the drug.

Amanda Fielding, director of the Beckley Foundation, believes that there are potential benefits of the medical marijuana for runners. The positive effects have an indirect effect on athletes. Consumption of the cannabis can help runners relax, before and after the competition. The drug can reduce anxiety, experienced by many athletes before a big competition.

Athletes can also use the medication after exerting themselves in competition. The drug can help people relax and sleep better, something that is needed to help the body recover from the effects of a grueling physical effort.

One particular advantage of marijuana is that it can make people more impulsive and give them more confidence to perform daring tactics.

Lastly, the drug can help control muscle spasms and provide pain relief in case of injury.

Tyler Hurst, a runner and cannabis supporter, has been using medical marijuana for five years. He usually ingests a squib, a small cannabis edible, before going for his long weekend runs. He explains that the medicine has helped him recover from fatigue faster than he could previously.

The Issue of Performance Enhancement

Cannabis can have a range of effects on the consumer. On the one hand the drug can produce feelings of euphoria and happiness. On the other hand, it can also enhance performance in sporting activities.

Consumption of medical marijuana becomes more complicated because of this particular reason. While sports regulators may not have a problem with marijuana’s effects on reducing pain or the calming effect it can have on athletes, a boost in energy levels could be categorized as unfair enhancement.

According to one study published in American Journal of Medicine, medical marijuana can increase cardiac frequency and alterations in motor performance. The drug is particularly effective at increasing heart rate while decreasing the chances of cardiac stroke.

A study on Australian athletes reported that a majority of them believed that Marijuana could be an ergolytic drug i.e. it could enhance performance during sporting activity.

Nonetheless, researchers are convinced that marijuana consumption, especially when smoked directly almost always leads to deterioration in senses and it would have a harmful effect, especially in competitive sports.

Some researchers however recognize that the drug could have a positive ergogenic effect, i.e. reduce anxiety and increase sociability of an athlete.

This could lead to a better performance in sports where competitors may be too nervous before a sporting event.

Researchers have also examined the effects of cannabis consumption after a competitive event. A study in France focused on students taking part in sports. The results showed that the athletes reported improvements in sleep, relaxation and a feeling of contentment which were the main motivations for taking the drug.

We should also point out here, that excessive use of marijuana consumption has led to having a opposite effect. Some athletes who develop an addiction to the drug show adverse effects like panic, nervousness, anxiety and restlessness which can causes problems in sleeping.

US Food and Drug Administration’s Position

The FDA has a curious position when it comes to medical marijuana. The Agency has not approved marijuana as a safe or even effective for any indication. Still, the FDA has approved two prescription medicines that do include a synthetic version of a chemical that is present in the marijuana plant.

The agency has also approved a synthetic drug that acts similar to compounds present in marijuana but not actually present in the herb.

The FDA has not approved any extract from botanical marijuana. However, it has approved drugs that contain synthetically created cannabinoids that act similar to medical marijuana.

Steve Kerr, the head coach of the Golden State Warriors and a member of NBA championship teams during his career is an active supporter of marijuana for athletes. He recently came out in support of the medical marijuana. The former star player even argued that NBA’s next Collective Bargaining Agreement should include a provision that would allow active players to use marijuana for medical purposes.

Medical marijuana is not just effective for athletes who are active in sports. Some of the most vocal proponents of medical marijuana are former athletes who have retired from professional sports, particularly due to injuries or physical problems developed through a lifetime of sporting activity.

Former NFL player Ebenezer Ekuban is one such supporter. He played professional football in NFL as defense for nine years before retiring. He explains how he developed a medical condition that causes chronic pain throughout his body, from ankles up to the neck.

“The pain is part of the territory. I know what I signed up for”, said Ekuban.

Medical marijuana helps him numb the pain and get through daily life as normal person. Ekuban wants the NFL to ease its restrictions on medical marijuana for existing players who may be going through a similar situation as he was while actively playing.

Another NFL player, Eugene Monroe, shared his own feelings.

“The pain never goes away. My body is damaged”, he said. Monroe was released by the Baltimore Ravens in 2016 after his public calls on the league to permit medical marijuana for players suffering from the effects of a career in the sport.

NFL is one of the most physically intensive sports with the highest number of ex-players calling for medical marijuana legalization. The players have received fierce resistance from the officials although the stance has softened somewhat.

NFL commissioner Roger Goodell said that he opposes players using the drug for recreation but he is willing to listen to the medical advisers on the potential value of medical marijuana.

A previous study on the consumption of medical marijuana in the athletic community revealed interesting results.

The rate of opioid use for retired NFL players is four times higher than the general population.

More than half of the NFL players turn to opioids during their NFL career.

71% reported misusing the prescription painkillers which are ineffective in dealing with their condition.

Medical marijuana offers professional athletes many benefits. It can help with a variety of symptoms including the following.