Home/Conditions/Medical Cannabis and PTSD
Previous Next

People suffering from PTSD are always in a state of mental anxiety and react with a fight or flight attitude to most stressful situations. PTSD patients also display suicidal tendencies and could be a potential threat to themselves and others around them.

PTSD is quite common in veterans returning from active duties. Stats show that roughly 15 percent of Vietnam Vets suffered from PTSD while 11 to 20 percent vets from U.S. engagements in Iraq and Afghanistan suffer from PTSD.

Although there is no permanent cure for the medical condition, many veterans suffering from PTSD claim to have received positive benefits from Marijuana treatment.

Cannabis is known for its strong stress relieving and relaxing properties and this could be the reason why it is so popular among veterans’ associations and support groups. This blog examines PTSD, its symptoms, causes, and treatments. We also look at the effectiveness of Marijuana therapy in treating the disorder.

Post Traumatic Stress Disorder is a mental condition that some people develop after witnessing or going through an intense, life threatening or nerve shocking event. Some of the major causes of developing this condition are military combat, natural disaster, accidents, sexual assault or a tragic death of a loved one.

It is normal for people to be in a state of shock and feel anxiety due to recent upsetting memories. Over days and weeks, most people are able to recover from shocking experiences and start to feel better.

However, people who continue to have the same intense feelings even after a few months are considered to have developed PTSD.

PTSD can be diagnosed by a doctor specializing in mental illnesses such as psychiatry or psychology. Major conditions of PTSD include:

People suffering from PTSD can also develop further complications such as:

Researchers believe that people have different thresholds for developing medical illnesses, especially mental and psychiatric ones. While some people are more resilient to tragic accidents and events, some people are more susceptible and higher risk for contracting PTSD after a traumatic experience.

The likelihood of developing PTSD depends on the incident itself. The characteristics that have been linked to triggering PTSD include the following:

Some individuals are at higher risk of developing PTSD than others. The common characteristics of triggering PTSD are listed here:

How PTSD Can Affect You

Research shows that people with PTSD are at a higher risk of developing other mental conditions such as anxiety disorders, depressions, bad eating habits and addictions.

Patients are also more likely to develop physical problems such as chronic pain, obesity, cardiovascular disorders, diabetes, respiratory complications and sexual dysfunction. Researchers are not clear on why people with PTSD develop these physical complications. Some believe that these are caused due to the release of stress hormones which contribute to inflammation in the body.

Apart from the mental and physical problems, patients of PTSD also suffer from a social breakdown in their relationships and work. Some symptoms of PTSD are sudden outbursts of anger, an inability to concentrate and problems sleeping. All of these have a negative impact on productivity.

Similar to most mental disorders there is no known cure that completely heals PTSD permanently. However, concentrated therapy can help reduce the symptoms and negative effects of PTSD to a great extent.

Psychotherapies or cognitive behavioral therapies (CBT) are considered the best methods of treating PTSD. The objective of CBT is to improve the patient’s symptoms, restore their self-esteem and teach them skills to deal with PTSD.

The treatments focus on re-living and talking about the event surrounding the cause of PTSD and build the patient’s resilience to cope with the experience.

This method relies on the patient talking about their experience and writing it down in detail. It is aimed at making the person realize that the event was not their fault, and reframe the negative memories around it.

This treatment is used for patients who have developed an avoidance symptom to the event. It helps the person gain control of their emotions by facing their fears and doing some of the things they have been avoiding.

In this method, the patient focuses the traumatic experience while doing something new and fun, such as making a sound or moving a flashlight back and forth. This helps the person associate positive feelings with the trauma, which improves their coping mechanism.

People suffering from PTSD have a quick trigger response due to their condition. These people could snap very quickly and always on edge.

Medication aimed at relaxing the mind and slowing down the thinking process has proven to make the patients feel normal and calm.

The most popular anti-depressants prescribed for PTSD are:

Although there are other FDA-approved medicines that may be used for controlling the symptoms of PTSD, these four are considered the most common. 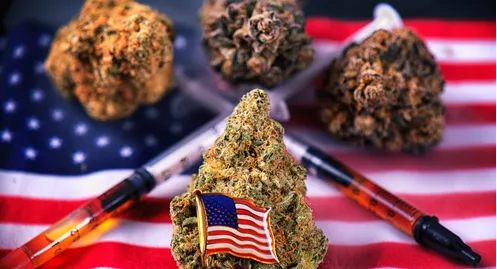 Marijuana is a potent painkiller. The herb contains powerful compounds like cannabidiol (CBD) and tetrahydrocannabinol (THC). These compounds attach to the CB1 and CB2 receptors in the nervous system and help relax the nerves and provide relief to the user.

Marijuana has been successfully used by patients to reduce pain, depression and insomnia. The drug also helps reduce the fight-or-flight anxiety based response in people with PTSD. Taking the medicine before therapy session in particular has been shown to help patients relax and respond more favorably to the therapists, during the session.

However, there are some downsides to Marijuana therapy for PTSD. Unregulated consumption could lead to substance abuse and drug addiction problems.

PTSD patients should always consult a qualified doctor and follow the prescription to the letter.

Marijuana therapy is not universally effective. While the drug showed positive improvements in symptoms for the majority of patients, it was also observed to have no effect on some patients. Some of the patients even reported adverse side effects such as fatigue, headaches and memory problems.

Future of Marijuana Treatment for PTSD

A majority of U.S. states now allow prescription of Marijuana for PTSD including New York and California. However legal issues surrounding research into the drug for medical purposes has still kept researchers from fully exploring the positive (or negative) impact of the herb.

Things might be turning for the better though. The FDA recently approved a study on the effects of medical Marijuana on veterans with PTSD. Based on the results of this study, a cannabis based medicine might be available in the markets as early as 2023. While the particular medicine would be based on the specific strains that researchers include in their report, it is unlikely to impact the medical marijuana being sold at dispensaries right now.