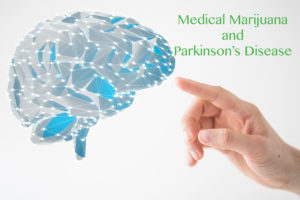 The European Journal of Pain recently published a study on the effects of Marijuana on motor and non-motor symptoms of Parkinson’s disease. The study, which was conducted by the Rabin Medical Center and Tel Aviv University, found motor control and pain symptoms improved in the 30 minutes following exposure to cannabis.

These recent studies could be great news for patients suffering from Parkinson’s disease which has similar symptoms to the ones reported in the study.

What Is Parkinson’s Disease?

Parkinson’s Disease (PD) is a disorder of the nervous system that affects a specific area of neurons in the brain which is associated with producing dopamine. The disorder causes a gradual break down of these neurons in the brain. This reduces dopamine production leading to abnormal brain activity.

Parkinson affects slowly and symptoms develop over several years. Each individual case is different as all humans have differing medical capabilities and immunities. While some people may show symptoms sooner, for others they may not become visible for some time. Early signs of Parkinson’s are usually mild and may even go unnoticed.

Symptoms mostly affect one side of the patient’s body first and stay worse on that side as the disease progresses to affect the whole body.

Some of the symptoms of Parkinson’s are listed here.

Patients usually experience shaking or tremors in a limb, often in their hands or fingers. Patients notice a rubbing or finger and thumb in what is known as a pill rolling tremor. This can happen even when the hand is relaxed and at rest.

This can happen in any part of the body. Patients experience stiffness in their muscles which reduces their range of motion and cause pain.

People suffering from Parkinson’s find it difficult to stand or walk straight and become hunched over.

The disease also affects a person’s reflexes and unconscious movements such as blinking and smiling. People suffering from Parkinson also lose the automatic swinging of arms while walking.

Parkinson’s disease also reduces a person’s ability to move quickly or to full extent. For example, steps become shorter when walking and throwing a ball or stick becomes weaker. Patients start dragging their feet when walking, because lifting them becomes harder. It becomes difficult to sit up when lying down and standing up while sitting gets harder.

People with Parkinson’s disease often develop insomnia and wake up frequently throughout the night. Medication is known to help people sleep.

The disease also impairs a person’s ability to communicate. Patients find it difficult to project their voice or change tone, and speak in a slurring monotonous manner. It also becomes difficult to understand what others are saying.

For some people, it becomes difficult to write as well.

The exact cause of Parkinson’s disease is unknown.  Researchers have identified some factors that seem to be associated with the disease.

Medical researchers have been able to identify a number of genetic mutations that are linked to Parkinson’s disease. Presence of these genes as a whole could increase the risk of the disease although each individual genetic marker has a low risk of causing Parkinson’s on its own.

Researcher has been looking into whether Parkinson’s could be triggered by certain toxic chemicals or bacteria.

Researchers have reported that Parkinson rarely affects teenagers or young adults. The risks of the disease increase in middle age or later life. People usually develop the disease around 60 or older.

Parkinson’s disease seems to have a hereditary element to it.  Researchers noted that people who have many close relative with the disease have a higher risk of getting it than someone with no history of Parkinson’s in the family.

Studies suggest that people who regularly come in contract with chemicals have a slightly higher risk of developing the disorder.

As the cause of Parkinson is not yet known, research into curing the disease has not been very successful.

Some evidence shows that caffeine reduces the risk of developing Parkinson’s. Furthermore, Amantadine (Symmetrel) is recommended for treatment in the early stages of the disease. This drug can help with the shaking and stiffness.

Side Effects of Parkinson’s Medication

The medical drugs for treating Parkinson’s can cause a number of side effects which make them not the best choice. Side effects of using these medications are:

Given the side effects associated with the medical drugs, some people prefer to use Medical Marijuana for the treatment of Parkinson’s disease.

Researchers are always looking to improve therapies and treatments to help patients control Parkinson’s symptoms. Marijuana has proved quite effective in treatment of PD symptoms.

Medical Marijuana provides many benefits. The drug is being used by patients to relieve pain and reduce tremors. It also improves appetite and induces better sleep.

Marijuana has more than a hundred neuro-active components that bond with two types of cannabinoid receptors in the brain. The Type 1 (CB1) is in the brain and boosting the receptor with Marijuana helps control tremors while alleviating dyskinesia.

During a clinical trial, researchers focused on a region of the brain called the globulus/pallidum. This area has the highest concentration of CB1 receptors. These receptors respond very well to cannabinoids. MRSI scans indicated a positive effect of CBD. The CBD resulted in neuro-stimulation in the Globus. The evidence clearly demonstrates that non-psychoactive strains of Cannabis may influence the initiation of PD and reduce tremors.

The Type 2 (CB2) is responsible for the brain’s peripheral immunity system and it is also stimulated by Marijuana. The effects of stimulating CB2 are under study to see if boosting it may help cure the disease.

A number of studies have been done to evaluate the effect of Marijuana on PD.

One study of cannabinoid trials showed the benefit to tics while no benefit for tremors in PR motor symptoms. The researchers concluded that more experiments are needed to better assess the therapeutic effects of this class of drugs in disorders.

Another pilot study suggested that nabilone, the cannabinoid receptor agonist has a significant effect on reducing levodopa induced dyskinesia in PD.

An evaluation of the effects of three antagonists on the NK3, neuro-tensin and cannabinoid receptors demonstrated that the drugs were safe for use. However, the study did not establish a link between Parkinson’s and Marijuana.

Based on the trials and research done so far, Medical Marijuana is quite effective in controlling the symptoms of PD. The majority of research has been focused on the anti-inflammatory and anti-oxidant effects of Marijuana, both of which prevent damage to the neurons.

The researchers have shown that inflammation can possibly damage neurons that create dopamine in the brain. Low levels of dopamine deteriorate the movement problems associated with Parkinson’s. So, preventing neuron damage could slow down the progress of PD into a worse stage.

Doctors recommend dosage ranging from 150 mg in the beginning to 400 mg in the fourth and last week of treatment that reported significant improvements in helping symptoms of PD.

Is Medical Marijuana Safe for PD?

Medical practitioners point out the need to use safe drugs for treating PD. Cannabis is considered safer compared to other viable options for treating the symptoms of PD.

According to the clinical trial cited above, there were significant improvements for in the patient’s sleep and pain scores. The study found no significant adverse effects of the drug. The study gives conclusive evidence that there is a place for Marijuana in the therapeutic treatment for PD.

As of right now, there is no cure for Parkinson’s disease. There are medications that can help you manage the symptoms. Marijuana is one therapy among many, which has been proven to have a positive effect and help patients relax, improve sleeping and stabilize tremors and shaking.

The therapy may not work for everyone, but if you’re interested in giving it a try, talk to a medical marijuana doctor to know if it could work for you.

THE INFORMATION CONTAINED IN THIS MESSAGE AND ANY ATTACHMENT MAY BE LEGALLY PRIVILEGED, CONFIDENTIAL, PROPRIETARY OR OTHERWISE PROTECTED FROM DISCLOSURE. If the reader of this message is not the intended recipient, you are hereby notified that any dissemination, distribution, copying or use of this message and any attachment is strictly prohibited. If you have received this message in error, please notify the sender immediately by replying to the message and permanently delete it from your computer and destroy any printout thereof.