You must have heard of John Lennon, Brian Wilson, and Syd Barrett. Do you know what all of these music legends have in common (apart from unmatched musical ability, of course)? All of them used drugs to boost their creativity.

This brings us to the topic of discussion. Recently a team of scientist conducted a study, which compared the creativity of people who consumed marijuana with those who didn’t.

The results of the study suggested that pot smokers did outperform people who didn’t smoke pot. On the surface, the results would indicate that marijuana boosts your creativity, however, it’s a lot more complicated than that.

Let’s take an in depth look and find out if marijuana has an impact on creative process or not?

There are two separate creative processes, which are used to assess a person’s creativity. These include: 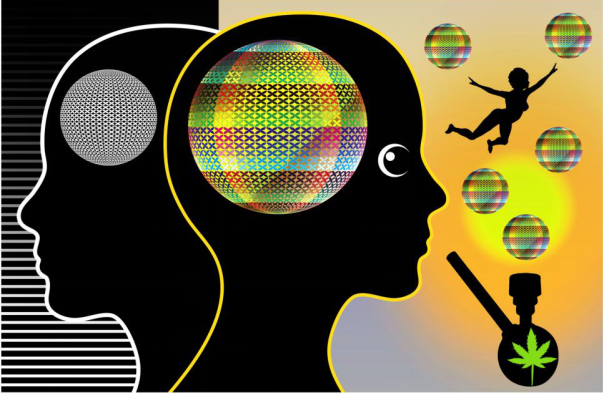 Convergent thinking involves conducting an assessment of a finite number of solutions in order to come at the correct conclusion. It’s akin to a multiple choice assessment. In order to measure convergent thinking, research analysts use a tool known as Remote Associates Test.

In these tests, a person is provided with stimulus words and they need to associate them with the solution word.

This method is similar to brainstorming. You are supposed to come up with as many solutions to a problem as you can within a specific timeframe.

Why Stoners Are More Creative

On the other hand, marijuana has been known to have a calming effect on people. As such, creatively anxious people find it particularly useful. Steve Jobs once famously said that smoking pot made him feel “relaxed and creative”.

Getting high is especially effective during the idea generation process.

Is It All Just In Your Head?

Skeptics state that the only reason people feel more creative after smoking pot is because that’s the perception they have about marijuana. Psychologists have stated that a person’s opinion of a drug does have an effect on the drugs performance (Placebo).

According to these people, there is a difference in feeling creative and being creative. However, at the end of the day it all depends on you.

Thinking of buying marijuana in California and New York? You’re going to need a medical marijuana card online. Get in touch with us. We offer medical cannabis in New York. Our doctors also perform online evaluations. Contact us at 844-307-9950.